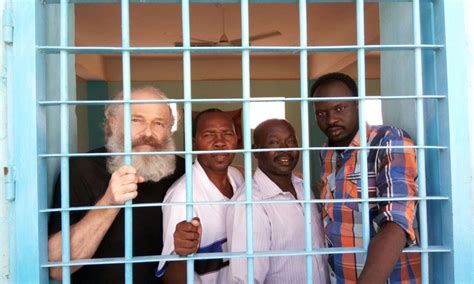 CLICK HERE to listen to a radio interview of Petr Jasek.

When the airport security officer tapped me on the shoulder and motioned for me to follow him, I didn’t think much of it. On December 10, 2015, I was heading home after spending four days in Sudan meeting with Christians and evaluating how Voice of the Martyrs (VOM) could help the church there. I assumed I was merely being given extra security at Khartoum airport with my boarding pass in hand.

Everything seemed routine until the officer spread several photographs before me on a table. I stared in shock at photos taken of me outside my hotel and other pictures of me at a restaurant where I had shared a meal with a Sudanese pastor. Clearly, I had been under surveillance by the Sudanese police ever since entering the country.

I looked nervously at my watch. My plane was about to take off, and I wasn’t going to be on it. Instead, I was being falsely charged with multiple crimes, including espionage and entering Sudan illegally.

When I was a teenager.my father handed me a book one day and said simply, “You should read this.” And that was how I got to know Richard Wurmbrand.

The book, Pastor Wurmbrand’s In God’s Underground, had been smuggled into our native Czechoslavakia by Christians providing aid to the underground church. My father had already experienced harassment and arrest as a pastor. My brothers and sisters and I were all harassed at school for refusing to join the Young Pioneers and wear the communist group’s telltale red scarf.

When Pastor Wurmbrand launched their ministry called Jesus to the Communist World, I grew up as the son of a pastor in the communist world. Czechoslovakia had become a satellite of the Soviet Union after the Communists seized power in 1948. By the time I was born, in the 1960s, the country was firmly entrenched in the Eastern Bloc.

Pastors and their churches were closely monitored, and authorities pressured families to enroll their children in communist doctrine classes. While my father’s official job was pastoring a state-approved church, he and my mother unofficially trained Christians through a network of underground churches across the country.

I’m ashamed to admit that as a boy, I was embarrassed by my father’s occupation and that it wasn’t honored by our government or culture. By God’s grace, however, I came to know Christ at age 15. Suddenly, I didn’t care what others thought. I spoke openly about my faith, even in the classroom. Teachers called me to their office, sometimes to punish me for speaking out but other times because they wanted to know more about Christ!

Although both my father and mother were, on occasion, detained because of their Christian work, we felt that it was an honor to suffer persecution in the name of Christ (Phil 1:29). Despite the pressure we faced as Christians under a communist government, we always knew that our brothers and sisters in other countries—free countries—were trying to support us. We never lacked for anything.

Years later, it became evident that God prepared me for that tap on Khartoum airport’s shoulder since I was a young boy.

In a Cell with ISIS

After confiscating my camera and laptop, authorities at the Khartoum airport questioned me for almost 24 hours. They wanted to know about every photo and every person I had met in Sudan. Finally, I was taken by car to a building that I later learned was a prison run by the National Intelligence Service of Sudan (NISS). The guards took my picture from the front and side before conducting an entry interview.

I was led to a cell at about 1:30 a.m., and when the guard opened the door, I could see one man on a bed and five more sleeping on the floor. I stepped into the cell, trying not to step on my new neighbors, and turned as the guard pulled shut the cell door. To my amazement, I felt sure I had seen that door before.

More than two years earlier, I had dreamed that I was in prison, which is not that surprising considering my work with persecuted Christians. However, in that dream, I clearly saw my prison cell door and heard the lock click into place. The dream affected me so much when a friend noticed the anguish on my face the next morning at church and asked me what was wrong.

The door in my Sudanese prison cell was the same door I had seen in my dream—it was the same color, it had the same window in the middle of it, and it made the same clicking sound as it locked shut. I realized immediately that my visit to the prison cell in Sudan was not a surprise to the all-knowing God I serve. The dream He had sent me two years earlier was a comforting reminder of His sovereign control over whatever I might face.

The five prisoners on the floor squeezed a little closer together and pointed toward a sliver of empty floor space. I lay down, without a blanket, trying to ignore all the questions racing through my mind: How long will I be here? What is my family thinking? What have they been told?

The next morning I met my cellmates, who immediately asked about news from the outside world. When I told them about the ISIS attack that killed 129 people in Paris, they jumped to their feet and started shouting, “Allahu akbar! Allahu akbar!” Their joy at hearing this news shocked and frightened me, so I decided not to share any further information with them.

My cellmates became increasingly demanding, especially during the five times each day when Muslims must pray. At first, they told me to stand behind them while they prayed so their eyes would not have to fall on a Christian. Then they told me I had to stand in the bathroom while they prayed. Finally, they ordered me to face the toilet and not even turn toward them.

They read the Quran aloud throughout most of the day, and I began to wonder how long I could stand the constant droning of Quranic verses without losing my mind.

Although I didn’t have a Bible in those early days of my imprisonment, God was faithful to remind me of verses that I had read or studied in the past. It seemed like every couple of days, He would remind me of a particular passage of Scripture.

The hardest thing was being away from my family and not knowing whether they knew where I was or what had happened to me. I quickly broke down in tears when I thought of them, so I worked hard not to think about them because I didn’t want my cellmates to see me crying.

In my mind, I began to repeat that verse over and over.

Then things in my prison cell changed for the worse.

My cellmates made it very clear that as a Christian, I was an infidel of little value. They called me “filthy rat” or “filthy pig.” At first, I refused to answer. That’s not my name, and I won’t dignify it with a response. But when I didn’t answer, they hit me with a broom handle and forced me to stand in the corner of the cell for hours at a time. Then they began to punch me and kick me.

They also questioned me about the Christian work I was doing in Sudan. If they didn’t like my answer, they hit me. As they slapped and kicked me, I thought of how Jesus was beaten with wooden sticks by the Roman soldiers. One particular beating was so bad that I thought I had a broken rib; a 400-pound guy kicked me with his shoes on, so it was excruciating.

Despite this physical abuse, I realized God was performing a miracle. I had peace! I could even think about my family and pray for them without breaking down in tears. God was with me!

My cellmates soon increased the pressure on me. One of them slowly sharpened the edge of a metal plate while threatening to slit my throat. They also attempted to torture me with “waterboarding” because the Czech Republic had cooperated with the United States in waterboarding Muslims. As they collected water to pour on my face and prepared to tie me up, a guard who had overheard their plans opened the cell door and moved me to another cell. I believe that the guard was sent by the Lord to save my life that day.

Via Voice of the Martyrs