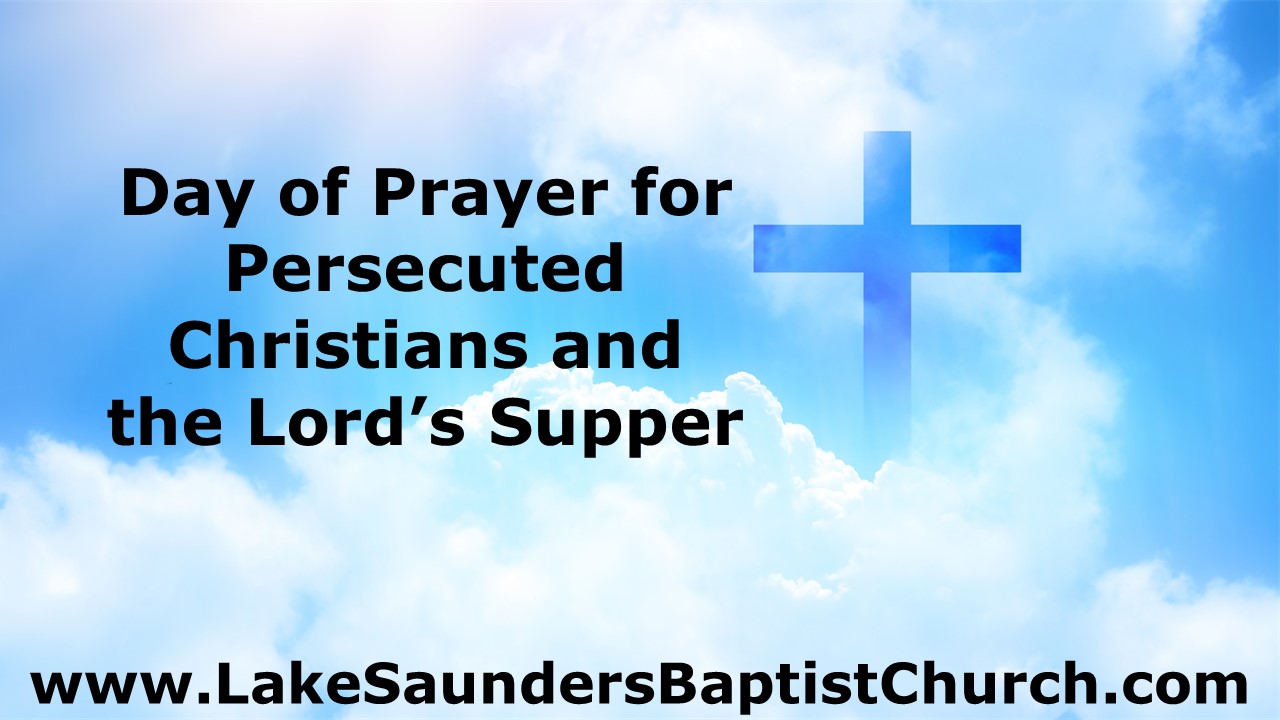 I want to speak to you today about the Day of Prayer for Persecuted Christians. Then we will observe the Lord’s Supper.

Open your Bibles to Hebrews chapter 13. We begin with verse 1: “Let brotherly love continue. Be not forgetful to entertain strangers, for thereby some have entertained angels unawares. Remember them that are in bonds as bound with them and them which suffer adversity as being yourselves also in the body.”

How can we fulfill this command and what does it mean for us?

So, how can we let brotherly love continue when this happens all around the world? Well, first of all, for us to love them, we’ve got to know something about them. It is imperative that you and I learn something about the conditions of our brothers and sisters around the world. Would you let me ask you a question? Would you hide and help Christians fleeing persecution? Let me ask you something else: would you risk your family’s lives to help persecuted Christians?

Remember what the Bible says in verse 2: “Be not forgetful to entertain strangers, for thereby some have entertained angels unawares.” We know that the word “angel” can be translated as “messengers.” And that is what we are as Christians. We are witnesses for Christ; we are His messengers. And yes, there are angelic beings and it may be referring to angelic beings, supernatural beings, but let me pose the question this way: if it was illegal to hide Christians, would you hide them?

Remember what happened in the late 30s and the 40s in Germany and Poland? Nazi Germany was in charge, it was illegal to hide Jews. Those who hid Jews were imprisoned in concentration camps. The most notable persons were Pastor Dietrich Bonhoeffer and Corrie ten Boom and her sister and her father. Would you do that if we’re going to let brotherly love continue and be expressed to our brothers and sisters in Christ? We need to be willing to help them. Well, I know what you’re thinking. “Pastor, we don’t have persecuted Christians here and there’s no way we can hide them.”

But there are some things that you and I can do.

Let me ask you another question: would you continue your financial support of missionaries who were executed by Muslims?

I’ve been a leader of Baptists churches for many years, and I know that we’re always trying to cut corners. We look at our finances and think about cutting budgets for missions. But cutting missions is the worst thing we can do.

What if we found out our missionary was executed because of his faith and his faithfulness in preaching the Gospel of Jesus Christ? Would we continue our financial support for their families?

I want you to think about that.

Let me give you some facts. Every month there are 322 Christians who are killed for their faith. Somewhere in the world, there are 214 churches and Christian properties that are destroyed.

Is it? I thought it was impossible for a lot of things to happen in our country, but I see sin accepted as good, every day.

Did you know there are 772 forms of violence that are committed against Christians every month? That includes things like beatings, rapes, arrests, forced marriages, children taken away from their parents, because they happen to be Christians!

What would happen if 125 American Christians stood with those persecuted Christians, prayed for them, and advocated for their release? If you want to stop persecution, you and I have to act.

There are various degrees of persecution: normal, moderate, and severe. In American, we may experience some normal persecution, like ridicule, being laughed at, and harassed. We might even be slandered, maligned, we might be a bullied, we might lose our friends, and we might even be ignored and shunned by our family.

But then you move into the moderate persecution. This is where Christians are being threatened, getting threatening phone calls, having threatening graffiti painted on their houses and their churches, they lose their jobs. What would you do if you lost your job because of your faith, losing educational opportunities? How about your children, your grandchildren being denied an education just because they’re Christians? How about physical abuse, false accusations, being arrested falsely, and falsely accused, being disowned, being dislocated, ripped up out of your home and put into a concentration camp?

Then there’s severe persecution where Christians are being kidnapped, forced into slavery, being imprisoned in re-education camps, experiencing physical torture, beatings, burned, dismembered, flogged. Some of them are murdered, executed, and then many of them are undergoing genocide, just like the Jews did in the late 30s and the 40s.

What does the Bible say that we are supposed to do? Verse 3 says: “Remember them that are in bonds.” This is not a flippant suggestion. This is an active command.

How can pray for them?  Thankfully, the Bible tells us how to pray for our persecuted brothers and sisters. In the Second Thessalonians, chapter 3, verses 1 through 3, the Bible says, “Finally, brethren, pray for us that the word of the Lord may have free course and be glorified, even as it is with you.”

We can pray for our persecuted brothers and sisters that the word of the Lord will have free course, that it will not be silenced, even in the prisons, that they would remain bold and courageous and continue to tell others about Jesus Christ.

I was in Romania on a mission trip. We were taken to tour one of the local prisons. It turned out it was the prison where Richard Wurmbrand was imprisoned. Our translator was talking to one of the prison guards. That guard began to tear up. He was one of the guards who tortured Wurmbrand. When Wurmbrand visited Romania after the fall of communism, he visited the prison. This guard had to take Richard down the into the dungeon where Richard spent years in a cramped cell. The guard said that Richard kissed the filthy cell floor and thanked Jesus for the experience of being faithful, even almost to death, to be a witness for him. Then he turned to the guard and said, “Jesus loves you and I forgive you.” That day, Richard led that guard to give his heart to Jesus Christ. Today, that guard is a bi-vocational Baptist pastor.

We need to pray that the word of the Lord will have free course to do what it intends to do.

Look at verse 2: “that we may be delivered from unreasonable and wicked men, for not all men have faith.”

We need to be pray that there will be somebody in that country where our brothers and sisters are that will stand up for them, defend them, intercede for them in the face of the government, and that they can be safeguarded from all kind of harm. Our prayers can certainly decrease the severity of their persecution, or even end it. Why? Because the Lord is faithful, who will establish them and keep them from the worst of the worst of the worst evils. That’s how we pray for our brothers and sisters.

What else can we do?

We can write. You can go to www.persecution.com and send written prayers to these persecuted Christians, so that they will know that they are remembered by somebody.

Imagine being in a dungeon, beaten, harassed by Muslim prisoners, and you have little contact with the outside world. Would a short note or prayer encourage you?  Let them know that somebody is praying for them.

We can also write our elected officials and tell them what’s happening to a fellow Christian in another country. We can ask them to check on them. Imagine 100 million Christians writing or calling our elected officials! Asking them to see what they can do, and then our federal state department starts calling on these countries. They’ll get the message. Folks, we have power if we stick together and every one of us work together. We can lessen and reduce the persecution that’s going on around the world.

There’s something else we can do. We can give. We can support these families of persecuted Christians. We can also give presents to their children for Christmas.

We can also send Bibles in their own language to these persecuted Christians. Did you know $7 will provide a Bible to our brothers and sisters? What a tremendous gift to feed and encourage their souls!

As we prepare to celebrate the Lord’s Supper, let us remember our brothers and sisters.

Let’s pray together: “Heavenly Father, we love you and we thank you for the privilege that you’ve lavished on us that we get to live in a free country. We are indeed a lot freer than many of our brothers and sisters around the world. Lord, I pray that you will call upon your people and impress upon your people the need for us to pray for the Peter Jaseks of the world who who spent 14 months in prison being abused and beaten by Isis Muslims. Help us, oh Lord, to remember that women like Janelle, who was poisoned by her own family because she became a Christian. She left two young children. Lord, our hearts are broken at these stories and we know it breaks your heart. I pray that the presence of your Holy Spirit will visit them today right now, increase their faith and strengthen them. Let them know that you are with them and you’ll walk with them through that trial that they’re in. Lord, I pray that you will call and impress upon your people here in America to write words of encouragement to their families and to intercede with our elected officials for them. Lord, I also pray that you will impress upon us to give to those of our brothers and sisters less fortunate than ourselves. May we continue our support of these persecuted Christians and may we give them the Word of God, the most precious gift in all the world. The Word of God to feed their souls! Now Lord, we are gathered here at your table as we prepare to celebrate the great sacrifice of our Lord and Savior. May you accept the sacrifice of our lives to your glory, in Jesus name. Amen.

In Matthew 26, verse 26, the Bible says: “And as they were eating, Jesus took bread, and blessed it, and break it, and gave to his disciples, and said, Take, eat, this is my body.”

Lord Jesus, you told us in the gospels that you are the bread of heaven–that the bread that feeds our souls. Lord, we are thankful for the brokenness that you experienced on Calvary’s cross that broke our bondage to sin. Thank you, in Jesus name. Amen. Take, eat.

“And he took the cup, and gave thanks, and gave it to them, saying, Drink ye all of it; for this is my blood of the new testament, which is shed for many for the remission of sins.”

The contract that Jesus made for those who trust in him would receive eternal life–He signed it in his own blood.

Let’s pray: “Lord, we thank you for the sacrifice of Christ, for as the remission of our sins, through his shed blood. May we, as we receive these cups of grape juice, be reminded that the blood of Christ was broken and spilled out for us. Thank you, in Jesus name. Amen.

Take it, drink you all of it. “And when they had sung a hymn, they went out into the Mount of Olives.”

I invite you to sing the first verse of Heaven’s National Anthem: “Amazing Grace.”